Mapping Mutations: Tracing the Travel of a Viral Image

Saturating the sensory regime of Indians, remaining locked down in their homes during the pandemic, was a familiar image: of millions of migrant workers clinging on to their scant possessions, while covering distances of hundreds of kilometers on foot. As a preventive measure for flattening the curve of the spread of the coronavirus disease, the Prime Minister of India announced a nationwide lockdown on the 24th of March, 2020. Ironically, the announcement was made only four hours in advance of its imposition, triggering a mass exodus of migrant workers who formed the backbone of the urban informal economy.

With the lockdown triggering a massive humanitarian crisis, the dehumanized “hidden, silent underbelly” of the city, who mostly “appear as lifeless statistics or as problems to be tackled,” erupted as a potent visible force to reckon with (Pendse 1996, 4). The apathy of the state towards the migrants necessitated various solidarity networks, media organizations, civic volunteers, and oppositional political parties to bear the responsibility of providing relief to the stranded migrants. The afore-mentioned collectives, by tracing and mapping the narratives of the laborers’ experiences through images and videos, significantly contributed to an awareness about the severity of the exodus crisis. These haunting visuals, on being uploaded to social media, gripped the national imaginary by acquiring an affective virality. In this paper, I study a specific image that went viral on social media and analyze its circuit of travel as it mutated into several allusive media texts that were also circulated on social networking sites as a response to the initial viral image. 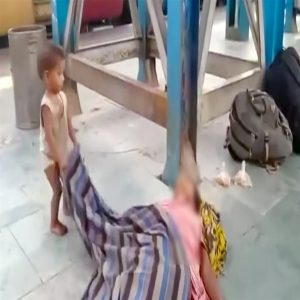 [Fig. 1] The image of the toddler tugging at the shroud that covered his mother in a railway station in Bihar, India. (Source: Online article by Aljazeera 2020)

A video that went viral on social media showed a toddler playfully tugging at the shroud of his dead mother, in an attempt to wake her up, while she lay motionless on the Muzaffarpur railway platform in Bihar. The woman had boarded the Shramik Special train[1] along with her family to reach home but had collapsed due to extreme heat and lack of food and water. The video, which had first been uploaded to social media by Sanjay Yadav, political advisor to the leader of opposition in the Bihar State Assembly, punctured the conscience of netizens and evoked an affective response from them. The specific moment of the child’s pulling of the shroud became crystallized in people’s memory as the image was extracted from the video and ossified, with all it’s tragic overtones, in several media texts.

This viral video formed one of the many viral visuals that were collated in a short animation film by Kireet Khurana, titled Pravaasi/Migrant, in which Bollywood actor Taapsee Pannu lent her voice in an apologetic tone. In his adaptation of the viral video, the filmmaker strategically stripped the visual of all situational and background information to carefully direct the audience’s attention solely towards the individual tragic incident. Using potent red, black, and white, the film captures the specific moment of the toddler tugging at the shroud while earnest infantile wails are heard on the soundtrack. Assuming the identity and the collective voice of the community of migrant workers, the voiceover pierces through the personal moment of loss, pleading that the community only demands to be treated as dignified humans. The image of the toddler is suggestively followed by a haunting refrain that creates a rupture in the intimate tragic event by evoking the socio-political context of the tragedy:

Kya iss desh ke vaasi hain? / Are we citizens of this nation?”

This subtle conjunction was aimed at making people conscious of the strategies by which the state had deprived the internal migrants of their dignified subject position of a citizen of the nation. The film offers an insight into the notion of citizenship as conceptualized by the state, besides critiquing the nexus of class­­­­­-caste privileges that the state ensured for the urban elites and the international migrants. Being marginalized by structural injustices that are operative along class-caste co-ordinates, migrant workers have been doubly oppressed. This is because they “are not formally recognized either as citizens nor as workers” by the state with the lack of legal employment protection guarantees gnawing at their precarious urban existences (Ahmed and Deshingkar 2020). Realizing how urban elites had condemned the migrants for being carriers of the virus, Khurana wanted to offer a counter-perspective by empathizing with the ordeals that the migrants underwent (quoted in Sebastian 2020). In an interview with HuffPost, Khurana stated that his motivation behind making the film was to ensure that the harrowing viral images were never erased from the collective memory.

Reading through the comments section on Facebook where Taapsee Pannu had shared the film, it became evident that the video had enabled the initiation of a discursive realm on the website. While a section of users trolled the Bollywood actor for criticizing the government from the comfort of her home, others supported her right to voice her opinion about the migrant crisis. Further, some users slammed the video as a publicity stunt while others stated that the video exposed the dehumanization that the migrant workers had been subjected to during the pandemic. What is significant is that the viral image of the toddler inspired another media text, the circulation and subsequent virality of which triggered social media users to further engage with and reflect on the tragic incident, thereby fostering a discursive space (Abdo, 2018). Irrespective of how individual users reacted to the toddler’s personal loss, what is crucial is that the image of the toddler could not be unseen. The molding of the initial viral image into subsequent media texts also points towards how the image had attained a visual pervasiveness, suggesting that the image and its context would be common knowledge among the people of the nation. Besides depicting the incident with all its affective textures, the filmmaker imbued the viral image with a critical value by associating the personal tragedy with the statist conception of citizenship. That the video resonated with netizens who were touched by the apologetic voiceover and the evocative refrain is evidenced by its virality.

The viral video of the toddler also inspired a cartoon by cartoonist Bala, where those in power are seen sleeping peacefully, unaffected by the plight of the toddler while he tries to wake them up from their apathy. The artist uses the frozen moment of the toddler tugging at the blanket but he shifts the focal point of attention from that of the deceased mother to the Prime Minister and Home Minister of India who occupy the foreground of the image. This shift provides a crucial vantage point to critique the statist response to the lockdown-induced migrant exodus. By associating the heads of state with the crisis of the toddler, the artist punctures the intimate moment of personal loss to comment on the institutional indifference that was meted out to the community of workers. Simultaneously underlining the individual tragic moment that befell the toddler and the apathy of the government administration, the cartoon resonated with netizens. Attempting to understand netizens’ reaction to the artist’s rendition of the viral image, I read the comments on the Facebook page of the cartoonist where the cartoon was uploaded. A user stated that he could not imagine the pain that the mother underwent before her death, being unable to provide food for her hungry son. Another netizen commented that the woes of the migrants would be overlooked by the television channels that would proclaim the financial aid offered by the government to the migrants. With arguments and counter-arguments, political responses and emotional outcries, the comments section emerged as a powerful participatory interface.

Social Media Websites as a Site of Discourse Generation

The plethora of ocular and aural signifiers of the migrant crisis encoded an emotive dimension that acted as a catalyst for their virality (Berger and L. Milkman 2012). The image of the toddler is, thus, one of the many evocative images that went viral on social media during the pandemic. With the subsequent mutation of the viral image into multiple media objects (such as illustrations, video essays, cartoons, and animation films) that were further circulated on social media, the virtual platforms sustained a dialogic engagement with the context of the image. This can be significantly attributed to the fact that social media users recognized the virtual domain as a potent interface with the external social world while being locked down in their homes (Pybus 2013). This virtual communicative network was crucial to the process of discourse generation where users reflected on the viral image and its specific contexts that were being critically addressed by the allusive media texts (Roese 2018; Schrøder 2007). While the artists referred to the viral image to offer a socio-political critique of the exodus, the users collaborated to foster a “space of interpretation that has the power to make meaning through its ability to privilege certain discourses over others” (Pybus 2013, 140). Thus, with the development of such “collaborative” processes, where artists and users both participated in adding critical meaning to a viral image, social media emerged as an active discursive domain (Jackson 2020, 93). It has already been suggested that the socially marginalized community of migrant workers acquired a media visibility during the pandemic (Chatterjee 2020; Dharker 2020). I argue that the visibility of the community of migrant workers was sustained by the employment of social media websites as an active site of discourse generation. This was achieved by the social media circulation of viral images as well as media texts that critically commented on the viral images. Both the processes helped build networks of sociality during the lockdown, ushering in the possibility for netizens to circulate, engage with and respond to the viral media objects on social networking websites.

Social media, therefore, contributed to an ever “evolving tableau of public memory” by ensuring that the viral image of the toddler left an indelible mark in the visual and discursive regime of the nation (V. Haskins 2015, 49). Significant to the process, however, has been the employment of social media as a crucial discursive arena that has helped attribute critical value and meaning to a viral image by ushering in an interactive and participatory interface. Interestingly, the social network witnessed analytical reflections on not only the viral image but also its multiple mutations that were circulated as a commentary on the viral image. This paper, thus, analyzes the virality and ocular centrality of the image of the toddler by tracing the trajectory of its social media travel through a mapping of the different media adaptations that it engendered.

[1] After migrant workers protested against their inability to go home, the government allowed the operation of special trains to allow the workers to travel. However, faulty planning and lack of co-ordination among states resulted in a number of trains reaching wrong destinations. This made the train journeys arduous, resulting in a lack of food and water during the duration of travel, which triggered further deaths.