Let’s Go to Oberhausen! Some Notes on an Online Film Festival Experience

This short essay reflects on the different spatio-temporal layers of “going” to an online film festival during the COVID-19 lockdown. Particularly, it looks at the case of the 66th edition of the International Short Film Festival Oberhausen, which made its competition and other programs accessible in blocks, each for 48 hours. Furthermore, it illustrates the concept of “connected asynchronicity” by discussing the censorship of an archival film that had first been made available (and viewable).

During the COVID-19 lockdown, the notion of “virtual” experience came to be the new norm of life: from virtual meetings with your best friends to virtual museum visits, conferences, roundtables, and film festivals. The “virtual” did (and still does) not stand in opposition to the real, but to the fact that the only real happened (and still happens) online. In this essay, I will briefly reflect on my first experience of “going” to the online film festival. I do not want to make predictions about the future by assuming that this will be the “new normal.” The scope is merely to reflect on how this specific experience affected me as a scholar and as a person, in a situation of very strict confinement, while living in Italy, where the first-wave lockdown (from early March to early June 2020) was heavily regulated.

I attended the online version of the 66th edition of the International Short Film Festival Oberhausen (13–18 May 2020) as part of an MA course on film archiving and festival programming that I was co-teaching with Marc Siegel at Johannes Gutenberg University Mainz. Originally, we had planned a physical excursion or “field trip” to Oberhausen for our students, but we were forced to revise the course concept due to the COVID-19 lockdown. When the festival announced that they would go online, showing not only the competition programs, but also the selections made by archives and distributors, we decided to take the students on this, for us too, new adventure.

A personal code in lieu of a festival pass provided access to around 350 short films, talks, and presentations, in addition to live DJ sets every night. Among the various programs, which were uploaded in blocks according to a precise schedule and remained accessible for 48 hours each, we preselected for our students a couple of competition programs, the archive programs (curated, for this year’s edition, by the Russian CYLAND video archive and the Polish Fundacja Arton), the Dutch EYE presentation of Henri Plaat, and the Austrian sixfilmpack distribution selection. Besides this compulsory viewing, students were free to navigate through all the programs and films on offer.

However, not all the programs of the 66th edition of Kurzfilmtage Oberhausen were made available online. The concepts of the “Conditional Cinema” and “Labs” sections, for instance, were not compatible with the new COVID-19 lockdown format, due to their emphasis on and celebration of “live” performance and projection. The “Labs” section, curated by Vassily Bourikas, is all about the experience of watching handmade photochemical films as material artifacts, as film strips running through a projector. This reminds us of the fact that analog cinema has a different kind of temporality, depending on the sequentiality of the film frames, once defined by Garrett Stewart as the “mechanical frame time of the track” (Stewart 2007, 127). Freed from the linear transportation of the celluloid strip, digital cinema is in this sense more apt for, or more akin to, online viewing practices. The absence of “Labs” at the 66th edition of Kurzfilmtage Oberhausen is, for sure, to be read as a statement, as a rejection of converting 16mm films into digital files, in order to stay true to the section’s original aim, which is, however, not to fetishize celluloid, but rather “to maintain the availability of different forms of cinema, not to privilege one over another” (Rapfogel 2018).

The variety of different forms of cinema was indeed annulled, at least in material terms, by the online platform that presented each film as an individually clickable item, albeit with a predetermined position in a program. Viewers were not “forced” to sit through an entire program, but could easily jump from (within) one horizontal program strip to the next, as long as they were simultaneously available on the platform. Deceptively, the typical anxiety about missing out on the gems of the festival ebbed away thanks to the “flexibility of internet time” (Otto 2015), which underlies the different temporality of digitally streamed cinema. Viewers experienced a great sense of freedom, since they not only could interrupt and restart their viewing whenever they wanted, but also could go back and forth in a specific program, watch certain scenes or entire short films again, freeze the image, etcetera. This flexibility also led to impatience among some of our students, who found themselves skipping the more “boring” parts of the program.

Not exactly 24/7, but rather 48/2 (that is, 48-hour program availability spread over two full days including night time), the festival became a form of “non-stop work site,” which was to some extent (at least within the context of the strictly regulated Italian lockdown) comparable to an “always open shopping mall of infinite choices, tasks, selections, and digressions” (Crary 2014, 17). This 24/7 logic of sleeplessness had to be combined with some form of “normal” family life, which for me made it personally quite challenging and exhausting, very different from previous film festival visits, during which I usually put all other (daily) activities on hold. Yet the simultaneous running of private and professional “timetables” also had its charms. I especially enjoyed sharing the highlights of the Children’s Film Competition programs, which I followed out of interest for my ongoing research on children and media, with my 12-year-old daughter whose genuine reactions to the touching short films I could more easily observe (and anticipate), as it was a repeated viewing for myself.[1] I made an exception for the Children’s Film Competition 3+, which we watched directly together and both loved. It was a nice surprise to discover afterwards that our favorite, The Shoe of a Little Girl by Kedar Shrestha, was awarded.[2]

Halfway through the festival, we met with the students in a virtual room in order to exchange ideas and experiences. This is how we found out that our asynchronous viewings actually led, at least in one specific case, to the reception/consumption of altered content. For the CYLAND video archive had taken the drastic decision to remove one of their films on the grounds of recent homophobic accusations against the filmmaker. While I was able to watch the video art performance film in question—New Icarus (1991) by Edward Shelganov—before the act of curatorial self-censorship took place and as such experienced the program as a 1990s framing of more recent work [Fig. 1], others only got to see the “Statement” by festival director Lars Henrik Gass [Fig.2].[3] 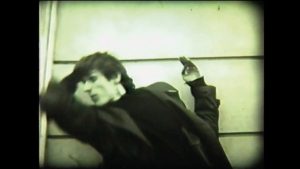 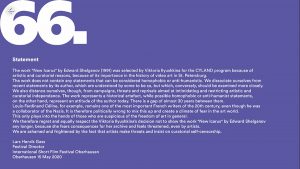 [Fig. 2] Screenshot of “Statement” by the Oberhausen festival director

Regarding the Q&A with CYLAND curator Victoria Ilyushkina we were equally out of synch, mainly because not all of us had understood that the discussion could be followed “live” on a different platform, separate from the program streaming. In other words, our simultaneous digital connectivity brought about a multiplicity of temporal experiences, not only quantitatively but also qualitatively differentiable. Picking up Robert Hassan’s notion of “connected asynchronicity,” one could say we were all forming our own times through the “juxtaposition of asynchronous spaces” (Otto 2015, 91); more generally, we were just experiencing how the “time of the clock” was undermined and displaced by the internet or network time (Hassan 2007, 51).

The collective viewing experience and social interaction, so typical of on-site film festivals, is what we all missed the most. Yet, despite the disparity and fragmentation of our different times, there was still a communal feeling of knowingness that “we are all in this together”—not only this new online media adventure, but also the global COVID-19 confinement. In this sense, it was quite appropriate that the Grand Prize of the City of Oberhausen went to Barbara Hammer’s Duneshack material, filmed during a residency in solitude without water or electricity and revisited twenty years later by Lynne Sachs: A Month of Single Frames (2019). For this poetic film inscribes the audience very literally within its images: “You are alone. / I am here with you in this film. / There are others here with us. / We are all together.”

[1] This discrepancy between our viewing experiences was the most “effective” in respect to the Dutch short En route (director: Marit Weerheijm), which follows two children and their father on an early morning trip to the city. Only at the very end does the viewer, together with the young female protagonist, realize that they are a poor family relying on aid from the food bank, which is the destination of their trip.

[2] This Nepalese short is about a 5-year-old girl who always wears her shoes the wrong way, mixing up left and right, until she finds an inventive way to remember: drawing a black dot on her left shoe at the same spot where she has a birthmark on her left foot.