This essay documents my experience of the pandemic through three inconspicuous objects that it has driven into a new visibility. As Amsterdam grappled with COVID-19, glass, adhesive tape, and boom microphones became conspicuously present in its local news station’s reporting. These three objects, all vital to media industries, usually remain invisible. Their newfound presence allows us to ask how the politics of space and visibility is negotiated through media techniques. Each of the three stands for various aspects of a society­—and a world—lingering under the threat of contagion. 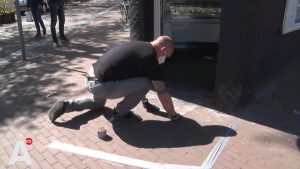 Adhesive tape has been appearing on Amsterdam’s local news with increased frequency during the crisis. What would the film industry be without adhesive materials like gaffer tape? Gaffer tape is the ultimate medium of improvisation, of the ad hoc fix meant to last just until the shot is in the can. We urgently need a media archaeology of gaffer tape: of the productions it has saved, of the film sets it held together, and of the visual relations of proximity it made possible by garrisoning actors in space. How many legendary film scenes do we owe to tape stuck to the floor?

Adhesive tapes are also a key medium of commerce and logistics. Online shopping is skyrocketing during the crisis, the news reports. We don’t often think of the adhesive tape that seals our online purchases. It is single-use waste, yet it is so central. It protects our commodities in transit, “encrypting” the packets we receive, enclosing and occluding their contents from view during their passage through the logistical network. In this moment, gaffer tape represents to me enclosure and the disciplining of space. Never before have I had to pay so much attention to cultural techniques of shielding and demarcation. Supermarkets draw grids and tables onto the sidewalk with tape. In assigned cells, consumers must bide their time before they are allowed to enter and shop. To plough a furrow into the soil, I remember Bernhard Siegert wrote, is “to engage in symbolic work because the graphein serves to mark the distinction between inside and outside, civilization and barbarism, an inside domain in which the law prevails and one outside in which it does not” (Siegert 2015, 12). Tape on the ground also symbolically delineates safe from contagious. There is, Siegert argues, ultimately no distinction between the symbolic and the material. Even adhesive tape, in its sticky ordinariness, can turn into a complex technique of inscription. Arrows and lines and various textual instructions can be written on the ground in tape. Suddenly, entering a supermarket requires choreography and direction. The ground becomes a legible medium, dictating how we must orient our bodies and what directions we have permission to take. A spontaneous system of diagrammatic governance emerges. The life-sized maps drawn in adhesive tape have turned the city into a film set, with positional cues for its cast spread out everywhere. Local news reports that more surveillance cameras are being installed around Amsterdam because unruly youth keep defying the strict new proxemic regime and continue to congregate in various areas around the city. All of us have become Truman Burbank. 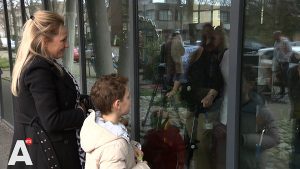 Glass windows have been appearing on Amsterdam’s local news with increased frequency during the crisis. I am more used to seeing windows on the news when they are destroyed or damaged, due to a shooting or explosion perhaps. During the pandemic, reporters oddly focus on glass that is intact. Elderly people in nursing homes are not allowed to receive visitors anymore, the news reports. A terminally ill man is only allowed to bid his final farewell through a window. Glass creates both access and its privation. “Maybe this is her last birthday,” a woman says with tears in her eyes as she is interviewed in front of a large pane of glass. Behind it, her grandmother remains out of sight to us.

Alexandra Schneider recently proposed that we should let glass and its many optical, architectural, and tactile uses lead our inquiry into the topologies and histories of the moving image (2020). Glass is so central to the film industry. The lenses of cameras and projectors are made of it, as are phone screens and computer monitors. But glasses also connect the moving image to optical medical instruments, and vaccine vials and Petri dishes. Despite its ubiquity, glass is a scarce resource. The news reports on a looming glass shortage, caused by the vicissitudes of global supply chains and the difficulty of manufacturing borosilicates. In this moment, glass represents to me impoverished social contact. Glass, this infuriating form of materiality that creates distance despite nearness. So cool and smooth are the glass screens we touch daily that they barely make a tactile sensuous impression at all (Schneider 2020). Glass is the antithesis of the textured shared surfaces and tactile forms of writing that many people rely on to navigate space (Goggin & Ellis 2020, 171). It is the antithesis of those ways of inhabiting the world for which physical contact and nearness are vital, and for which distancing is not an option (Shin 2020). “Objects, as well as spaces,” I remember Sara Ahmed wrote, “are made for some kinds of bodies more than others” (2006, 51). Glass is terrifyingly good at marking and guarding the “for-ness” of spaces. Spaces that are for “the elderly,” “the disabled,” “the vulnerable.” By being contained in such spaces, they can also be pushed out of sight (Lemos Dekker et al. 2020). In a few weeks’ time, many of us will have adjusted to remote teaching and Zoom dinner dates behind glass screens. Many others will have died secluded behind glass screens. 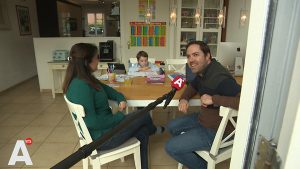 Boom microphones have been appearing on Amsterdam’s local news with increased frequency during the crisis. To comply with distancing rules, TV reporters are forced to let go of the instrument so characteristic for their work and improvise new interviewing techniques. Never before has the labor of sound been so visible to me. The boom mic looks bizarrely out of place in news reports. It is heavy and cumbersome and belongs to a different tradition of moving image production; a tradition that has done its utmost to expel it from the image. The boom operator, the invisible Atlas of the film industry. Hardly any other job on the set requires as much endurance as the boom operator has. Endurance has become a valued resource during the pandemic. Our prime ministers ask us to endure: the new rules, the confinement, the distancing. We must endure, we are told, or else be fined. The boom operator is so central, a key worker of the film industry, and yet permanently out of view. Key workers, as the Dutch government calls them, are all those employed in “vital sectors” whose labor simply does not lend itself to transmission via glass screens. But it is “sectors” that are vital, not their workers, and thus working bodies can be put to work at risk to their own vitality. Protected are corporations and infrastructure, not the many logistical workers and seasonal, migrant, and undocumented agricultural workers. Health protection is also perversely denied to health sector laborers, a large portion of whom work on zero-hour and temporary contracts, since, after years of privatization, the neoliberal remains of the Dutch healthcare system cannot sustain secure employment (Brandon 2020).

In this moment, the boom represents to me endurance and invisible labor to me, but also a model of sociality. A way of organizing space very different from both adhesive tape and glass. The boom does not belong in the disciplinary order of partitioning that grids drawn in tape make possible. Nor is it comparable to media of containment and seclusion like glass. The boom mic produces spaces that are permeable, spaces not already designated “for” someone but necessarily shared, open, and traversable. The boom mic allows voices to commune and be heard. It creates nearness despite distance.

The COVID-19 crisis brought to my attention with renewed urgency some of the peripheral and transparent media that tend to be pushed from view, and with them some cultural techniques, modes of political governance, and forms of labor that tend to do the same. I chose to focus on glass, tape, and boom mics not only because they persistently kept appearing as visual motifs on my local news, but because each of them presented itself to me in ways that were unsettling and unexpected; their material and affective presence more piercing than usual. Following the local reporting at the peak of the crisis and observing the responses to it on the streets of Amsterdam, the city appeared to me like the refracted image of a film set. Its gestures, labors, and techniques performed in the open, in an improvisatory but remarkably forceful and effective manner. If “space is political” (Lefebvre 1976, 31), then some of these mundane materials and techniques can help us understand how it becomes such. Objects like adhesive tape, glass windows, and the boom harbor a capacity to reconfigure “the intimacy between habits and space” (Ahmed 2006, 129) that far exceeds their unassuming existence in our lives.

There may be other ways of encountering this capacity. What I experienced as techniques of containment and division, others might view as reasonable, safe modes of contact and socialization under exceptional circumstances. In either case, the pandemic moment is a lesson on how instrumental various unseen media are to the production of specific patterns of spatiality, and thus to the control and distribution of closeness, visibility, and access. Above all, the crisis should make us vividly aware of how political power is articulated in our gestures, movements, and in the textures of objects we both touch and don’t dare to. The tape stuck to the floor, the cold glass, and the heavy boom mic remind us that our bodies are never our own. They extend beyond ourselves when they interface with others in networks constituted through the traces we leave behind, the surfaces we come into contact with, and the very air we breathe.

Brandon, Pepijn. 2020. “Coronavirus and the ‘Survival of the Fittest’ in the Netherlands.” No Borders (interview). April 12. https://nobordersnews.org/2020/04/12/pepijn-brandon-coronavirus-and-the-survival-of-the-fittest-in-the-netherlands/. Accessed April 30, 2020.

Lemos Dekker, Natashe, Laura Vermeulen, and Jeannette Pols. 2020. “In and Outside the Nursing Home: On the (Im)Possibilities of Meaningful Contact While Being Held Apart.” Somatosphere. July 20, 2020. http://somatosphere.net/2020/in-and-outside-the-nursing-home.html/. Accessed August 3, 2020.

Shin, Ji Young. 2020. “Standing in Solidarity with Those Who Must Refuse to Keep Social Distance: Activism in South Korea.” In Pandemic Solidarity, edited by Marina Sitrin and Colectiva Sembrar, translated by Han Gil Jang, 71–89.